“LEAP Today” is a great way of creating specific, realistic expectations for your day. It is easy to  do and, even on the busiest of days to be, it generally takes me less than 5 to 10 minutes to LEAP into the day.

LEAP is an acronym for List, Estimate, Allow for the unexpected and Pioritise for today. 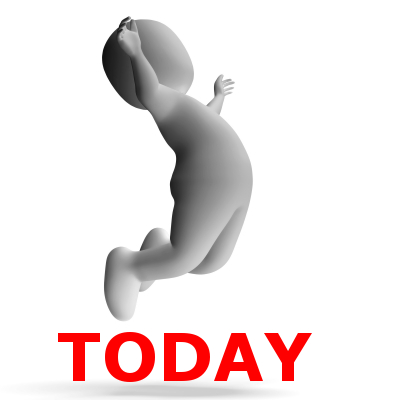 LEAP Today is for a To-Do List fresh each day, do NOT keep the same list running. and get real – get purposeful – get results – savour the pleasure of your flexible, responsive, focused efficiency today.

Demands on your time and energy come from lots of places, some of which are planned (like your projects, scheduled appointments), some of which you can predict (like regular duties) and some of which you may be called upon to do (out of the blue, maybe), etc. Pick out items/pieces of work for TODAY from your usual To-Do lists.

Make an educated guess at quite how much effort and elapsed time each item – piece of work – will take.

Allow for the unexpected

REMEMBER – this is about Today’s priorities rather than priorities in the overall scheme of life!

List, Estimate and Prioritise are all pretty run of the mill, aren’t they? The Allow for the Unexpected is, for me, the magic touch. What do you think?

Through doing LEAP Today I am inspired to set realistic expectations. I am creating my day’s agenda today. I am blending items from the world of demands and allowing for the unexpected. Add those things together, and I ‘get purposeful’, using my energy and time effectively, focus with clarity on intentions for the day. At the end of the day, I scan the list and get a buzz from noting my achievements.

I had a job where there were a number of channels of planned demand on my time – meetings, regular duties (commitments as a manager, technical specialist and/or a project resource), project tasks etc. I also spent a lot of time dealing with interruptions of all kinds. The interruptions were often critical, important and/or urgent including unexpected problems to be solved, discussions to bring an unexpected (and unwelcome) situation under control etc. etc.

My (monster) To-Do list was fed by items from the planned stuff (meetings, duties, project tasks) and was … errmm … overflowing, sometimes overwhelming and NEVER in the right order. Things got crossed off, some dropped off (no longer required) and, always, always, items got added.

It was demoralising. I worked long hours (too long), did a lot of stuff and worked very hard (no, really) but never got to finish my To-Do list!

Then two things happened around the same time. First, I had a ‘Time Management’ course which gave me the idea to record how I ACTUALLY spent my time. My thinking was that reviewing my actuals would, hopefully, give me insight into what the ‘time thieves’ were. I’ll admit that I really didn’t want to do this ‘every 15 minute actual time spent record’ at all – but I promised myself I would do it for one week. Second, during that same week, I encountered the LEAP Today. My eyes, and heart, were drawn to the “Allow for the Unexpected” and there was little tug from the “Prioritise for today“.

Observation of my ‘actual time spent’ crystallised what I had mumbled often … on average, 50 to 70% of my time was being spent on the unplanned ‘interruptions’. However, dealing with ‘interruptions’ was an essential part of my job (one of those unwritten/unplanned/taken for granted items). A five minute conversation could avert a disaster waiting to happen or save the waste of time and effort on dealing with avoidable consequences. You know, the priority zero (override all other priorities) kind of things. There was no way I could stop handling ALL interruptions!

Focusing on the interruptions, it became obvious that some were predictable – in terms of scale of demand if not in the specific items – quite what they were was a daily surprise, but that they would happen was predictable. Key step 1 – I added an item ‘predictable interrupts‘ to my list of things to do on a daily basis with an estimate of, say, 30% of my time. Key step 2 – I added an item ‘the unexpected‘ with an estimate (based on observation) of, say, 30% of my time. On an average day, I now had 40% of my time for ‘planned items and regular duties’. If the ‘predictable interrupts‘ and ‘the unexpected‘ actually take less than estimated there is a good chance that I can get ahead of the game. WooHoo!

Adopting “LEAP Today” to create my To-Do List for today made such a positive difference to my sense of achievement on a daily basis and, dare I say, put a bit of a bounce back in to my step! The monster To-Do list is tamed! The “LEAP(ed)” To-Do List for today blossomed with big ticks (never underestimate the power of the tick), my daily sense of achievement soared actually generating energy and so much more. So simple. So effective. So it flows – like magic.